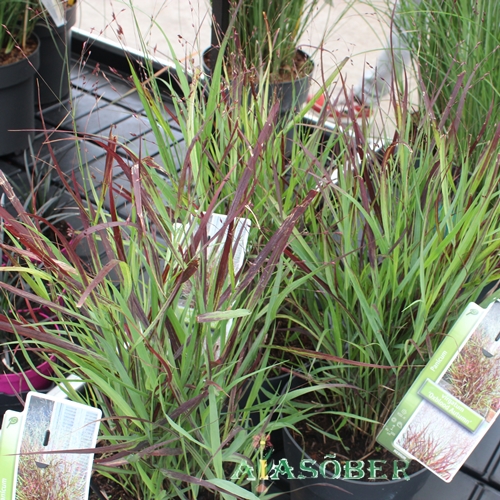 Soil: Panicum is famously adaptable to almost any soil.

Unique Qualities: ‘Northwind’ is very easy to grow. It will enhance any sunny border, not just a native, meadow- or prairie-style garden. ‘Northwind’ has a refined, garden-worthy appearance and habit.

Maintenance: There are no serious insect or disease problems with Switchgrass. Plants are best divided in spring. ‘Northwind’ is not patented. It can be reproduced from divisions. Liners are available from numerous propagators, including members of the Perennial Plant Association.

This warm-season perennial grass has blue-green foliage and stands more erect than is typical of the species. ‘Northwind’ is only the third ornamental grass to be named Plant of the Year™ following Calamagrostis ‘Karl Foerster’, 2001, and Hakonechloa macra ‘Aureola’, 2009.

The genus Panicum, native to North America, is a member of the Poaceae family (formerly family Gramineae). Regardless of nomenclature, members of Panicum are excellent perennial grasses for the landscape. The genus botanical name (Panicum) is thought to derive from the Latin pan, bread. One species (P. miliaceum, common millet) has been used for centuries to make flour.

The origin of the common name switchgrass or switch grass is obscure.  “Switch” is believed to be a variation of Middle English “quitch,” among whose meanings is “quick,” or alive, suggesting the grass is difficult to kill. Others say the name derives from the swishing sound the grass makes when tossed by the wind.

Roy Diblik selected ‘Northwind’ from a population of Panicum virgatum he raised using wild-collected seed from plants growing along railroad tracks in South Elgin, Illinois. In July 1983, he noticed that one plant had wider leaves and a very upright growth habit, unlike the typical arching form of the others. He gradually built up stock of the upright one. In 1992, when Northwind Perennial Farm opened, he introduced it and named it ‘Northwind’.

Panicum virgatum ‘Northwind’ spreads slowly to form erect clumps of slender, steel-blue leaves about five feet tall. In late summer, the foliage is topped by a haze of showy, finely-textured flower panicles that rise to six or even seven feet, and that open golden yellow and mature to beige.

This website uses cookies to improve your experience while you navigate through the website. Out of these, the cookies that are categorized as necessary are stored on your browser as they are essential for the working of basic functionalities of the website. We also use third-party cookies that help us analyze and understand how you use this website. These cookies will be stored in your browser only with your consent. You also have the option to opt-out of these cookies. But opting out of some of these cookies may affect your browsing experience.
Necessary Always Enabled
Necessary cookies are absolutely essential for the website to function properly. These cookies ensure basic functionalities and security features of the website, anonymously.
Functional
Functional cookies help to perform certain functionalities like sharing the content of the website on social media platforms, collect feedbacks, and other third-party features.
Performance
Performance cookies are used to understand and analyze the key performance indexes of the website which helps in delivering a better user experience for the visitors.
Analytics
Analytical cookies are used to understand how visitors interact with the website. These cookies help provide information on metrics the number of visitors, bounce rate, traffic source, etc.
Advertisement
Advertisement cookies are used to provide visitors with relevant ads and marketing campaigns. These cookies track visitors across websites and collect information to provide customized ads.
Others
Other uncategorized cookies are those that are being analyzed and have not been classified into a category as yet.
SAVE & ACCEPT